Our stores in NJ & NC are temporarily closed in response to the COVID-19 pandemic until further notice. Our online store is operating with delayed delivery times.

The precious thread of love: Rakhi

Raksha Bandhan is the auspicious Indian occasion which celebrates the most sacred relationship between brothers and sisters. As per Indian tradition, every sister ties a thread on her brother, which is not only an expression of her love, but also a blessing that protects him from all evil and illness. It is believed that a Rakhi thread is stronger than the iron chains and capable enough to strengthen the bond between brothers and sisters.

It is an exciting time for a sister as she scavenges across stores to find just the right Rakhi that expresses her feelings. As trends change, this simple thread of love has evolved with fashion and innovative styles. Just like it’s customary for a brother to gift his sister, she in turn feels that this scared thread should be precious. Over time, the trend of gold and silver rakhis has added a new zest into this festival. 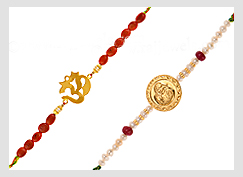 When 22k gold is mixed with colorful and popular rudraksh beads, topped with religious God motifs, the result is a rare rakhi that is apt for your brother and extremely pleasing for bhabhi as well. 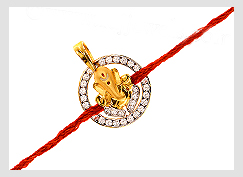 A design that has been exclusively launched by Raj Jewels is the pendant rakhi- a 2-in-1 design. When we showed it to our customers, their first response was sheer amazement. Urvi Jariwala, an IT expert in New Jersey, walked into the store with the intention to not buy a gold rakhi. We asked her why, and she responds, “Instead of tying a costly gold rakhi on my brother, I would prefer gifting him something that he can use. Yes, it is certainly a nice gesture but you can only wear it for a couple of days after the festival and then it’s just going to be locked inside the cupboard.”

Understanding exactly what customers like Jariwala are looking for, we created these 22k gold pendant rakhis. So one can wear it on the wrist on the day of the festival and then the same rakhi can be worn as a pendant on a chain without the thread. Isn’t that a gift that would be much more memorable for your brother as he can use it even after the festival is over? “This is a brilliant idea. I am not even going to think twice as this is a rakhi that both my brother and I will cherish forever,” said the same Miss Jariwala who instantly fell in love with them.  See the featured video and witness her reaction when Bobby Bansal speaks about the launch of this new collection. 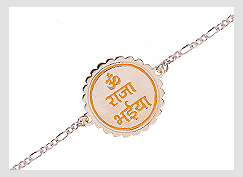 Silver is a metal that has been synonymous with gifts for Indian auspicious festivities and it continues that tradition with the rakhi as well. This design that resembles a chain bracelet, is ideal for both brothers and bhabhis.

Explore an assorted collection of rakhis in gold and silver and celebrate this festival like never before.

Posted in Style & trends By