Our stores in NJ & NC are temporarily closed in response to the COVID-19 pandemic until further notice. Our online store is operating with delayed delivery times.

Say "I do" with a Gemstone Ring

Every woman wants it and every man wants to gift it to the woman of her life. As trends change, women have a new best friend; it's colorful and it's a gem that is now a popular pick as a precious stone.

We caught up with New Jersey based restaurateur Shaun Mehtani, who wanted to make a sparkling fashion statement when he decided to propose to his then girl friend Maria Nateva. 31-year-old Mehtani, remembers the time when he was preparing to make the big leap of faith. "We had quite a few friends who were getting engaged at that point and it seemed like the rings they chose were beautiful but lacked creativity. So I thought a gemstone would work very well. I chose a ruby as Maria looks best in red (which symbolizes love) and also complemented her fiery personality."

Trend versus a personal choice

The trend of color stone engagement ring is one that's been growing as celebrities too are allured by it. Kate Middleton's blue sapphire engagement ring is the most talked about ring of all time. Singer and actress Jessica Simpson is admired for her ruby gemstone ring. The list is endless as we look at Hollywood's newsmakers. Is that what sparked the thought within the New Jersey born Mehtani? "I think trends are senseless. I proposed with a gemstone in the Summer of 2013 because I wanted to. I also chose yellow gold because it would look good on her Bulgarian skin," he says. There is nothing trendy about a ring that says "I love you". 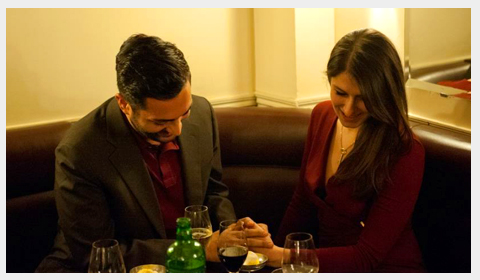 The gem that connects hearts

Mehtani is a man who clearly knew what he wanted when he was referred to Raj Jewels by a friend. "I was insistent that I wanted a 2.6 carats cushion cut Burmese ruby and Bobby Bansal went out of his way to make my vision into a reality. And of course, it was GIA certified and also included 1.45 carats of diamonds. " This is not a piece that is available at any store. It is something that is created exclusively to make life's most important moment memorable. "The whole idea is how we both as partners feel connected with things we own. The story behind the piece is more important than the piece itself," explains Mehtani.

The ravishing $17K piece of jewelry was more than enough to sweep Maria off her feet. All he had to do is just show the ring to her, as he recalls the moment. "I actually forgot to ask her if she would marry me. She just looked at it and we both smiled and she just said yes. Today they are celebrating their second anniversary and the gorgeous piece of ruby is the symbol of their unity that they continue to reminisce.

The classic engagement ring has a new personality with varied shades of colors, whether this is a celebrity inspired trend or just a calling from the heart. "We love creating a piece that speaks from the heart and connects to another heart; in the end it brings a sense of satisfaction that we helped bring this vision to life," asserts, the dream-maker Bobby Bansal.

Posted in Engagement rings By