Our stores in NJ & NC are temporarily closed in response to the COVID-19 pandemic until further notice. Our online store is operating with delayed delivery times.Learn More

Jewelry is not just about fashion and trends but it now encompasses the element of spirituality and positive energy. Pioneers like Alex & Ani have introduced jewelry that not only makes you look good but also promotes personal well-being. The Jewelry Edit Blog explores the new concept of what is being known as yoga inspired jewelry.

In recent decades, more and more people have discovered that yoga offers health, healing, and even inner transformation. As the practice has grown, so has the popularity of jewelry inspired by yoga symbols. One such popular symbol is Om- written in ancient Sanskrit, it is part of the popular chant in worship of the Hindu Lord Shiva. Its meaning is deeply significant and spiritual, and is representative of the four divine states of Brahman – karuna (compassion), metta (loving kindness), mudita (sympathetic joy), and upekkha (equanimity).

The symbol Om has a special meaning. The two curves on top of one another, and the connected curve to the right, which looks like the number 30, represent three states of consciousness. The larger, bottom curve, stands for the state of normal awareness or being awake. The smaller curve above it stands for deep sleep, and the one that emanates from the center of these two curves represents the dream state. 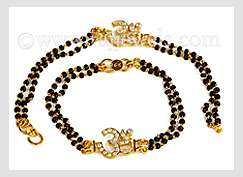 “In the South Asian subcontinent, Om jewelry is classified as religious jewelry and has been a preferred choice of gifting for special occasions like birthdays, weddings and child births, synonymous as a spiritual blessing in gold or diamonds. ” says Bobby Bansal, MD, Raj Jewels. The hottest sellers at Raj Jewels are Om jewelry, Rudraksha bracelets and God pendants. 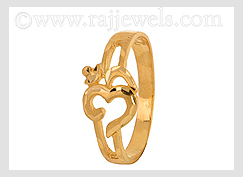 A religious symbol whose significance began as a symbol of peace and worn by followers of Lord Shiva, has been embraced by the West in the form of spiritual jewelry.  The millenials are top on this list of followers who believe in meditation and love their yoga pants. They want their lifestyle to be depicted in their jewelry as well. 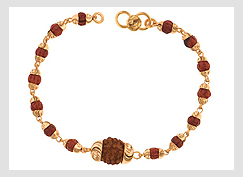 “We have youngsters who come to our store, wanting to customize the Om jewelry. They do not prefer the glitzy yellow gold look but rather mix it up with other elements like a black thread or rudraksh beads. And many of these are not only Indians but also other nationalities. We are excited to be able to adopt our jewelry to this new trend and serve an international clientele,” affirms Bansal.

If you are looking for jewelry that expresses your personality and at the same time infuse positivity into your soul, explore our Om Jewelry Collection.

Posted in Style & trends By